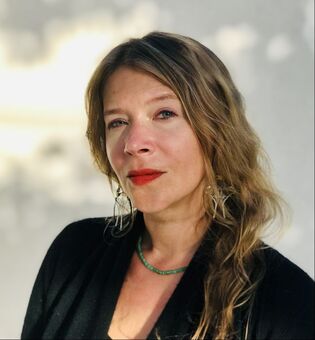 ​Kate Polak is a writer, artist, performer, and scholar specializing in comics, poetry, 21st century women writers, and the literatures of genocide.

Assistant Director of the University Center for Excellence in Writing and Instructor in the English Department at Florida Atlantic University, where she teaches writing and literature, focusing on contemporary women's writing, the representation of violence, and graphic narrative.

Her book, Ethics in the Gutter: Empathy and Historical Fiction in Comics, was nominated for an Eisner Award.

Her scholarship has appeared in Diegesis, Trespassing​, and several collected editions. Her public scholarship has been featured in The Chronicle of Higher Education, The Hooded Utilitarian, and elsewhere. Her creative writing, including poetry and comics, have appeared in a variety of venues. She is currently developing a graphic novel, a collected edition on the intersection between historical fiction and science fiction (co-edited with her husband, Dr. Ian MacDonald), and a monograph on the effect of new technology on Holocaust remembrance.